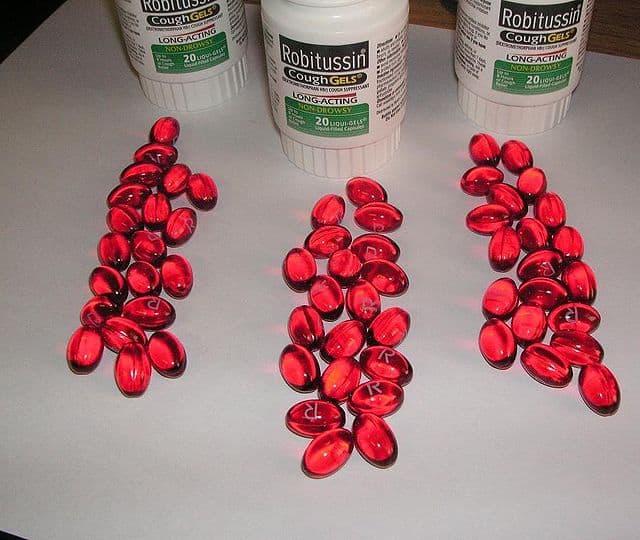 Parents are all the more concerned about their teenagers abusing over-the-counter cough medicines containing dextromethorphan. This drug is easy to obtain and potentially dangerous if combined with other drugs such as marijuana. To clarify the interaction of DXM and weed, we offer this article to tell you everything you need to know. But first, let’s define the former by itself; dextromethorphan.

Dextromethorphan, abbreviated as DXM, is an active ingredient that is commonly found in a lot of over-the-counter cough medicines. Used as a recreational drug for its dissociative effects by many, DXM has no psychoactive effects at medically recommended doses.

However, it has powerful dissociative properties when administered in greater doses – surpassing the point where it’s considered therapeutic for coughs and symptoms of influenza. The recreational use of DXM is also referred to as robo-tripping. The prefix derives itself from the Robitussin brand name which derives from the Coricidin brand.

However, this medicine presents a real danger when used for recreational purposes – or when mingled with other substances such as marijuana. The most commonly abused forms of DXM include extra-strength cough syrups, tablets and gel capsules. Other medications such as OTC medications that contain DXM also contain antihistamines, for instance.

DXM may be swallowed or is popularly mixed with soda for flavor. This is commonly referred to as robo-tripping. Some users inject it, and others are prone to abuse these medicines often in combination with other drugs, such as alcohol and/or marijuana. Let’s investigate the use of DXM and weed – AKA robotripping – further in the next section.

The Effects of Using DXM and Weed

Using DXM together with cannabis may lead to a variety of adverse effects. It is said to increase dizziness, drowsiness, confusion and disorientation. Some people may experience a decreased ability to think clearly, judge correctly, and motor coordination in particular.

Short-term effects of the misuse of DXM and weed can range from mild stimulation to complete intoxication. At higher doses than the recommended dosage, a person may even experience hallucinations or feelings of physical distortion, extreme panic, paranoia, anxiety, and increased levels of aggression.

When combined with the smoking of marijuana, other health effects from DXM misuse can include and are not limited to the following;

When mixing DXM with weed, a significant interaction is likely to occur. The combination of DXM and weed may have in effect any of the following and more: Delusions, agitation and mood changes.

Smoking weed and taking DXM-latent cough syrup may increase the risk of the many dangerous side effects of DXM alone, and may even lead to severe condition such as hallucinations, impaired thinking, profound loss of coordination, increased heart rate, and fatal liver damage.

After taking DXM together with cannabis, the concentration may diminish, thus making it hazardous to drive or operate any heavy machinery. In the worst of times, Dextromethorphan and marijuana abuse could even lead to death and overdoses.

Central nervous system- and/or respiratory negative effects may be increased in patients taking multiple drugs such as DXM and marijuana simultaneously. These effects are caused, especially in elderly or somehow debilitated patients.

Seeing that the impairment of attention, judgment, thinking, and psychomotor skills may increase in such a patient, they should be carefully monitored for what is called potentially excessive respiratory depression. Cautious dosage initiation may be required, particularly at the onset of treatment.

Ambulatory patients, in particular, should learn how to avoid hazardous activities that require mental alertness and proper coordination. Be sure to notify your physician if you experience excessive or prolonged CNS effects.

There is a lot that can be done for patients that struggle with DXM and weed addiction. Although there is no pharmaceutical treatment for DXM addiction, there are a number of effective alternative therapies.

Dextromethorphan addiction treatment focuses mainly on dealing with the immediate effects of DXM-related addiction. This may include treating the worst of the withdrawal symptoms such as reducing the essential psychological dependence.

The next time you want to Robotrip, you might want to reconsider the full extent of the implications. If you want to fly high, you’d want to do it responsibly and in such a manner that your high is truly enjoyable. The popular mixing of DXM and marijuana is becoming more rampant and we therefore would like to make you aware on the dangerous – and even fatal repercussions of this combination.