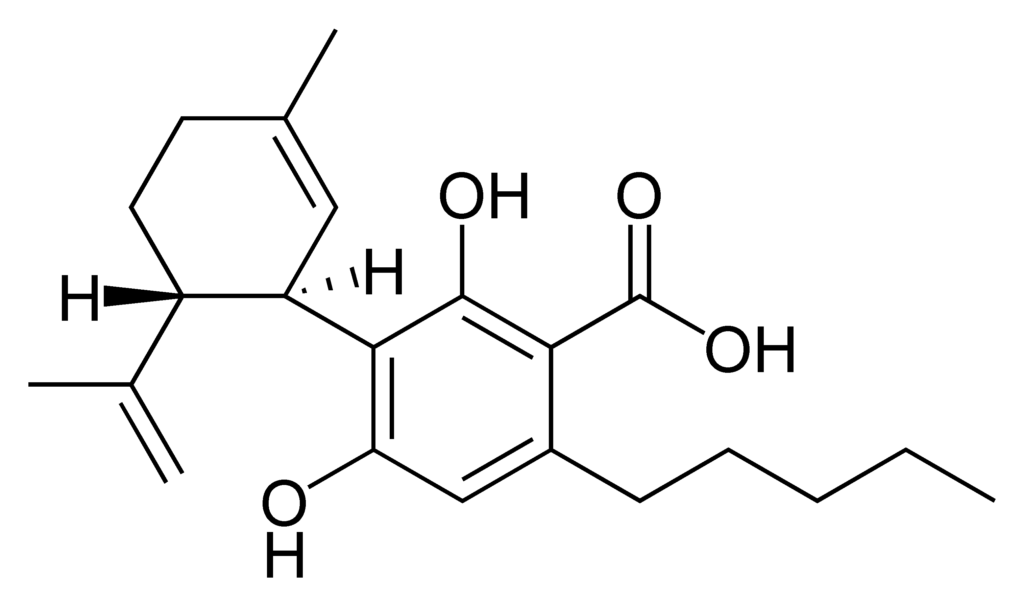 The health benefits of cannabidiolic acid (CBDA) are only beginning to be realized. Most people associate CBDA with anti-inflammatory benefits alone. However, there are at least six more therapeutic benefits that are linked to CBDA.

This article elucidates on these benefits and explains why this compound is giving cannabidiol a run for its money (Spoiler alert: Did you know that CBDA is a safer alternative to CBD?)

All phytocannabinoids that are found in hemp originate from one acidic precursor; cannabigerolic acid (CBGA). Plant enzymes breakdown CBGA into different acidic compounds such as THCA and CBDA.

CBDA is an acidic phytocannabinoid that is derived from CBGA. Raw cannabis has high amounts of CBDA, but once exposed to heat and drying the CBDA quickly converts to CBD.

CBDA is converted into its active form CBD when it is heated to a temperature exceeding 270°F; this process is referred to as decarboxylation.

How Does CBDA Work?

CBDA, unlike most phytocannabinoids, does not interact with the endocannabinoid system. CBDA exerts most of its therapeutic effects by interacting with the serotonin system. Serotonin is a neurotransmitter that is found in the brain and it is involved in the regulation of moods, sleep, social behavior, appetite, sleep, sexual desire, and memory.

CBDA mechanism of action is still under investigation. Like CBD, it is highly likely that CBDA exerts its effects through numerous other pathways.

CBD and CBDA have striking similarities because one is the precursor of the other. Raw hemp (before it has been subjected to high temperatures) contains the acidic forms of cannabinoids which are also inactive. The acidic form of CBDA is CBD. It also follows that the acidic form of tetrahydrocannabinol (THC) is THCA. The same goes for CBG whose acidic form is CBGA.

Both CBD and CBDA are non-intoxicating which endears them as therapeutic agents. Because CBDA is not combusted, it is safer as a therapeutic agent because it contains less toxic compounds that may arise due to combustion.

Numerous studies have been conducted on CBD, unlike CBDA. This is because CBDA had been relegated to the sidelines on the assumption that it is inactive and thereof therapeutically insignificant. Consequently, you expect to find more scientific literature on CBD as well as more products.

The therapeutic benefits of CBD are well known and popularized. As for CBDA, we are just beginning to scratch the surface. However, forward-thinking pharmaceuticals such as GW Pharmaceuticals are following this space closely. As it is, GW Pharmaceuticals has  already taken out several patents on CBDA.

In 2018, this pharmaceutical released an FDA approved CBD-based drug into the market for the treatment of intractable childhood seizures. Since CBDA has similar anti-seizure benefits but greater bioavailability, combining these two may help to improve the efficacy of this drug.

Despite being the precursor to CBD, CBDA has attracted significantly less attention. With the current shift in interest, CBDA might soon be taking the spotlight.

How To Consume CBD Vs CBDA

When it comes to consumption, there is not much difference between how CBD and CBDA are consumed. But since CBDA cannot be combusted, there are no smokable forms of this compound.

Edibles that contain CBDA have to be prepared at low temperatures that do not allow decarboxylation to take place. CBDA can be consumed in the form of tinctures, oils, capsules, gummies, and topicals.

Because CBDA is inactive, it will not interact with the endocannabinoid system in the same way that CBD and other active phytocannabinoids do. This explains why CBDA had been assumed to be pharmacologically inactive for a long time. However, research is now showing that CBDA uses alternative mechanisms to trigger therapeutic effects.

Research into CBDA began in 2008 when researchers began looking at the anti-inflammatory benefits of CBDA. Scientists discovered that CBDA has structural similarities to nonsteroidal anti-inflammatory drugs (NSAIDs).

In one study, it was shown that CBDA exhibits COX-2 inhibitor behavior that is similar to that of NSAIDs. This gives CBDA equal anti-inflammatory benefits.

A team led by Dr. Raphael Mechoulam has created a stable form of CBDA (cannabidiolic acid methyl ester) which is not as heat sensitive. Through an animal model, this compound has been tested and found to have significant anti-anxiety benefits.

CBDA’s role in treating depression is at the preclinical stage. Preliminary research has shown that CBDA has stronger antidepressant effects as compared to CBD. This could have to do with CBDA’s greater affinity for serotonin receptors.

CBDA is a strong anti-nausea agent. One study showed that CBDA has 100 times more affinity for serotonin receptors that are linked to the reduction of nausea and vomiting. This is especially helpful when combined with traditional anti-nausea drugs (such as ondansetron) that are administered to cancer patients undergoing chemotherapy.

The role of phytocannabinoids in cancer treatment is a hot topic. While CBD has been shown to play a potential role in suppressing tumoral activities, research is now showing that CBDA has similar benefits against breast cancer cells.

The 5-HT serotonin receptors are involved in the control of seizures. CBDA has a greater affinity for these receptors and uses this mechanism to offer anticonvulsive benefits.

7. CBDA is a Precursor to CBD

CBDA is the precursor to CBD. Decarboxylated CBDA will have all the therapeutic benefits of CBD.

What is the Bioavailability of CBDA?

Where to Buy CBDA

Currently, CBDA is being offered in combination with CBD. Not many CBD companies have included CBD in their recipes. CBD businesses that offer CBDA include:

Is CBDA Better Than CBD?

It is difficult to make an apple-to-apple comparison between CBD and CBDA. These two compounds are different and offer unique therapeutic benefits based on how they interact with the different body systems.

CBDA has two obvious advantages over CBD. Because CBDA is not combusted it is a safer alternative to CBD. Also, CBDA has greater bioavailability meaning that a small dose of CBDA goes a long way.

CBDA health benefits as outlined in this article are very promising, but it will take larger clinical trials to validate these preliminary findings.