Could Cannabis Have Stopped Kyle Rittenhouse From Murdering Two Men?
Table of Contents 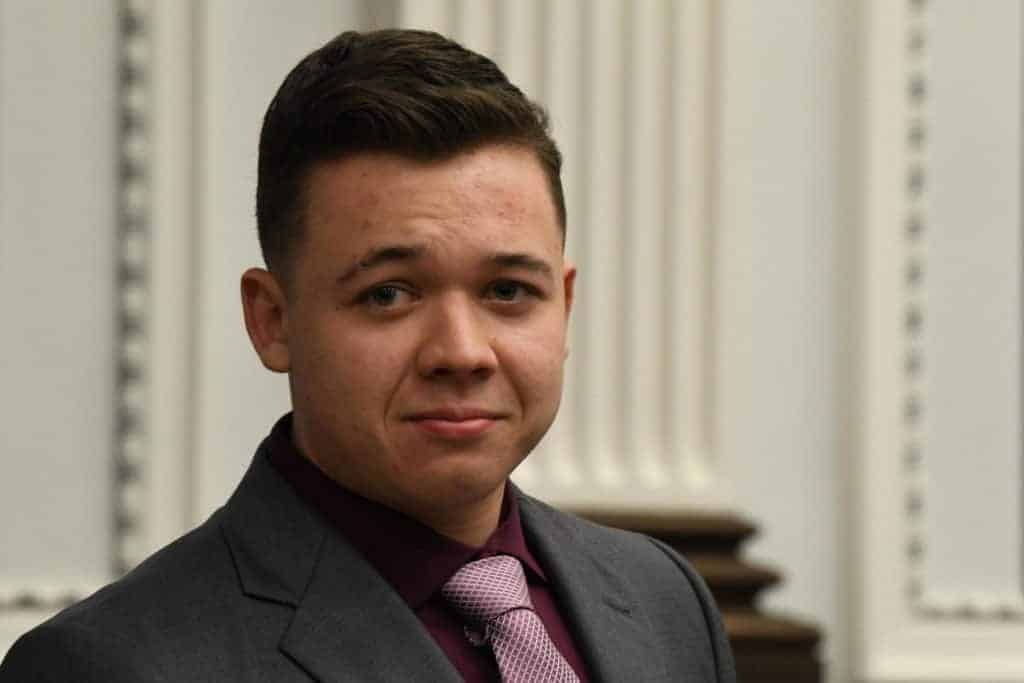 Could Cannabis Have Stopped Kyle Rittenhouse From Murdering Two Men? This is a question being asked on forums and social media sites in the cannabis community.

The Kyle Rittenhouse case has shaken the US and further divided black and white relations amongst US citizens. The Kyle Rittenhouse verdict is mind-blowing to many American citizens who cannot believe the lax gun laws our country has and the many catastrophic instances it has caused over the past few decades.

As the nation stands dumbfounded by the recent murders committed by Kyle Rittenhouse, many in the cannabis community would like to know if he was either stoned, or could have used some weed to calm his nerves. Was he drunk? Did the police check his blood/alcohol level at the time of the shootings?

It is more likely he was drunk than stoned is the general consensus. And if he was drunk, wouldn't that have contributed to his aggressive behavior?

Could cannabis have helped Kyle Rittenhouse not commit the murders he did? Cannabis has been proven to calm nerves and curb violent tendencies in users.

Things we do know about Kyle and what has been revealed to date:

The Kyle Rittenhouse shooting video shows events that most believe is hard to fathom resulted in a not guilty verdict. The Kyle Rittenhouse trial is one of the ages that stirred the souls of millions of Americans both who believed he should be guilty of murder, and those who did not.

The end result of this event led to Kyle Rittenhouse charges being dropped on all counts of murder. Kyle Rittenhouse was acquitted on all charges in the fatal shooting of two men and wounding of a third during a night of protests in Kenosha, Wisconsin, in August 2020.

These were the Kyle Rittenhouse charges that were all amazingly dropped.

COUNT 1: FIRST-DEGREE RECKLESS HOMICIDE, USE OF A DANGEROUS WEAPON

COUNT 2: FIRST-DEGREE RECKLESSLY ENDANGERING SAFETY, USE OF A DANGEROUS WEAPON

COUNT 3: FIRST-DEGREE RECKLESSLY ENDANGERING SAFETY, USE OF A DANGEROUS WEAPON

COUNT 4: FIRST-DEGREE INTENTIONAL HOMICIDE, USE OF A DANGEROUS WEAPON

COUNT 5: ATTEMPTED FIRST-DEGREE INTENTIONAL HOMICIDE, USE OF A DANGEROUS WEAPON

COUNT 6: POSSESSION OF A DANGEROUS WEAPON BY A PERSON UNDER 18

In such a clear case where the facts show that Kyle was guilty of most of not all of these crimes somehow with a strong legal defense he walked away and escaped a deserved life behind bars.

The last charge, count 6, is a slam-dunk guilty that he got away with as well! Rittenhouse was armed with an AR-style semi-automatic rifle and was 17 years old on the night of the shootings.

Wisconsin law prohibits minors from possessing firearms except for hunting or when supervised by an adult in target practice or instruction in the proper use of a dangerous weapon. Rittenhouse’s attorneys argued another subsection of the law, regarding short-barreled rifles, and ended up getting that count dropped as well! This is a complete joke and slap in the face of the victims family's and even the law in Wisconsin.

It is a mockery of the Wisconsin gun law. The Kyle Rittenhouse shooting should have resulted in a murder verdict and most certainly a possession of a dangerous weapon by a person under 18.

Something is very wrong with the law if an AR-15 semi-automatic rifle is considered to be not a dangerous weapon.

We all know he was 17 and shot people to death with an AR-style semi automatic rifle.

Yes he got away with all charges? Even possession of a dangerous weapon by a person under the age of 18?

Doesn't this concern you as a US citizen that the law can be interpreted this way with the help of an expensive legal defense team?

Was Kyle Rittenhouse drunk when he killed two men that night?

The police should have immediately tested Rittenhouse's blood/alcohol level since alcohol often contributes to an increase in aggressive behavior and a decrease in judgement. It will forever be unknown if alcohol played a part in the murders but many believe it likely did.

Did you know Kyle Rittenhouse had a gofundme page? Rittenhouse wants the world to help him pay for his legal fees. The Kyle Rittenhouse fundraiser is a sore subject for many who feel he is not deserving of any sympathy nor funds after fatally killing two men.

Who is Kyle Rittenhouse?

On August 25, 2020, Kyle Rittenhouse, a 17-year-old, fatally shot two men and wounded another in Kenosha, Wisconsin. The shootings occurred during the protests and riots that followed the non-fatal shooting of an African American man, Jacob Blake, by a white police officer.

Kyle Rittenhouse is a murderer who is a free man, walking the streets, in fact, gaining fame and fortune from the atrocious acts he committed. Kyle Rittenhouse age was 17 at the time of the shootings, not 18 as some are saying on social media.

Where is Kyle Rittenhouse From?

Kyle Rittenhouse is from Antioch, Illinois.

Who Were The Kyle Rittenhouse Victims

The Kyle Rittenhouse shooting victims were:

Joseph Rosenbaum was the first person Rittenhouse shot on this crazy night. Rosenbaum had just been discharged from a hospital in Milwaukee.

The 36-year-old came into near contact with Rittenhouse in a used-car lot. Rittenhouse aimed his an AR-15-style rifle at Rosenbaum to let him know not to mess with him. Rosenbaum was unarmed, carrying only a plastic bag with some socks, toothbrush, toothpaste, deodorant and some papers inside it.

Rittenhouse's lawyers claim that Kyle was threatened by this unarmed man when a paper bag was thrown at him. Rittenhouse then shot and killed Rosenbaum and fled the scene after.

Anthony Huber is from Silver Lake, Kenosha, Wisconsin. He  was one of the men fatally shot by Kyle H. Rittenhouse on August 25th, 2020.

Both Huber and Rittenhouse were in the same Black Lives Matter demonstration that took place that evening.

Rittenhouse was a 17-year old with an AR-15 semi automatic rifle claiming that he wanted to protect businesses from vandalism. Police alarmingly allowed this to take place which is hard to believe is not wrongful on their part.

Huber was at the event demanding justice for Jacob Blake who was shot by Kenosha Police Department officer Rusten Sheskey on August 23rd, 2020.

Huber did not have a weapon. He was killed by Rittenhouse because he swung at Rittenhouse with a skateboard trying to unarm him since he knew that Rittenhouse had just shot a man minutes earlier. The defense attorneys for Rittenhouse argued that their client was in grave danger from this skateboard yielding man and his shooting of Huber was justifiable.

Gaige Grosskreutz, 27, is a trained medic who had provided aid at around 75 protests prior to this event on August 25th, 2020. Grosskreutz admitted to pointing a pistol at Rittenhouse after hearing gun shots and fearing for his life. Rittenhouse then opened fire with his machine gun, injuring Grosskreutz but not killing him as he did the other 2 victims.

When asked by a Wisconsin court if he was trying to kill Rittenhouse, Grosskreutz said, “that’s not the kind of person that I am. It’s not why I was out there for 75 days prior to that, why I spent up until that point my time, my money, my education providing care for people.” “It’s not who I am and definitely not somebody that I would want to become,” he added.

Did Kyle Rittenhouse have a criminal record prior to this event?

All three files state, “case has not been concluded. Unless a judgment of conviction is entered, the defendant is presumed innocent of all charges.”

Who is Kyle Rittenhouse Mother?

Where is Kyle Rittenhouse Now?

Is Kyle Rittenhouse in jail? Surprisingly the answer to that is no, he is not in jail. Rittenhouse has been using this incident to his advantage, doing interviews on major news channels and trying to cash in on his sudden popularity. Rittenhouse spoke to Tucker Carlson on Fox News.

It should be noted the victims in this case did each have a criminal history. But, regardless, is it ok for a 17-year old non-government employee, non-Police Officer, to roam the streets with an AR-15 and shoot and kill people? No matter what was going on, should citizens be able to perform such acts? Or should they stay the responsibility of our police officers and government instead?

If 17 year olds are allowed to carry Ar-15 semi automatic rifles and shoot citizens to death does that concern you at all about the safety of where you live?

Could Cannabis Have Stopped Kyle Rittenhouse From Killing Two Men?

According to a recent study by the Research Center of the Institute Universitaire en Santé Mentale de Montréal, Montreal, QC, Canada based on a review of animal studies it has been generally found that studies using smaller doses of THC/cannabis have been less likely to report the emergence of aggression, whereas studies using higher doses and more chronic exposure have rather led to an increase in aggressiveness.

Cannabis use is certainly safer than alcohol and has been linked in far fewer violent crimes.

What do you think? Could cannabis have helped chill Rittenhouse out and perhaps stopped the violence from getting out of hand as it did?